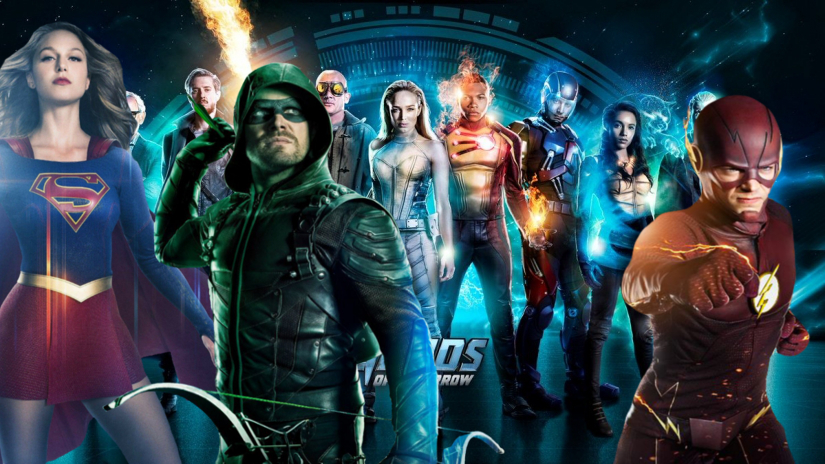 We know. We missed last week, making this not all that weekly of a round-up. You can thank illness of the face for that. But we’re back this week! So let’s break this one down before another week slips by us.  Worst to First, let’s do it! (A bit spoilery, but not too bad)

Bless her little Kryptonian heart, she’s trying. She really is. But what do you do with an all-powerful, god-like character? A question that’s plagued the Superfamily since forever.  At first, the showrunners decided to borrow some of the best of the MAN of Steel’s history the first season, then had him actually show up in National City  for what was arguably the best episode of season 2. Well, the answer this year seems to be ignore the question, because other characters not named in the title have a lot going on, and we’ll get to Kara. Promise.

This season has a lot happening to be sure. There’s Alex and Maggie’s wedding that is CLEARLY doomed to not happen as hinted at these first three episodes, Nathan Petrelli is doing his best at megolomaniacal industrialist (until his isn’t? Maybe next week?), Lena Luthor bought Catco because…um…reasons, and Odette Annable will at some point be “making it Reign”. (That’s her quote, not our quote. It’s punny as hell, but admittedly better than what we would have come up with.) Oh, and that one girl is sad about her boyfriend being maybe dead. What’s her na–OH! Kara! Right!

To be FAIR, Kara did some stuff this week. J’onn did most of it assisting M’gann and the white martian resistance though, but Supergirl helped. It was a decent bit of business with J’onn reuniting with his father he previously thought deceased.

A darker, distracted Supergirl was kind of fun. Not Snyder dark, but Kara with a chip on her shoulder that first episode would have made for an interesting sub-plot this season as she works through the idea that even with all the power in the world, she can’t save everyone she loves. It’s a good third season plot that could flesh out Kara and grow her as character. Because if she’s the role model for a generation of young girls, they need to see that even our heroes struggle and we all need to find it in ourselves to overcome.

…No? You’d rather wrap that up half-assedly after 2 eps? Alright, how about a wedding shower then? Yeah to hell with it.

…What are we going to do with this show? The time slot change is  bad enough as it makes it a lot more difficult to get these reviews done in a timely manner–on top of all the other reasons– but the writers insist on recycling the same storylines the way Flash recycled Ollie’s apartment in last week’s episode. Yeah, we noticed. All of us noticed.

Anyway, Oliver is again this season spending more time as the mayor than as the Green Arrow like last year. Because when we go to watch superhero dramas, it’s important to us that we spend at least 10 minutes an episode worrying about new legislation.

This week, Diggle takes over as Green Arrow as Oliver is under the watchful eye of FBI Agent Mrs. Plot Device, and wants to be a better father to William “Exasperated Sigh” Clayton. Digs got the shakes though as is having confidence issues thanks to his last season visit to Lian Yu. I don’t speak any languages beyond this sort of English and “I am a pineapple” in French, but I have to assume Lian Yu is Mandarin for “No Real Stakes Island”.  We’ll come back to that.

From there, the never-ending, white hot poker in the eye that will not be named came on screen. I  was suddenly overwhelmed by my own form of Diggle Shakes and slapped the video halfway across the room. I came to outside, standing over a burn barrel holding a box of matches as my tablet sat on top of the pile, reeking of gasoline. The tablet’s fine, but I can’t finish a review for you, because I’m on a kind of expensive laptop and I don’t want to risk another blackout.

Even with the imminent destruction of my tablet, Arrow still ranks ahead of Supergirl this week. This show is still trying to find it’s way back, and we feel like it still can, but it needs to bring back the high stakes that the first two seasons had.  Yeah, they killed Laurel, and for this, we will never forgive them, but this show has lost it’s nerve. If you’re going to have every character on an island, and you’re going to explode that island, then have every character survive, you’ve wasted a perfectly good island explosion. They had the chance to course correct, (same as with Flashpoint) and they didn’t take it.  They keep letting all the plucky sidekicks survive. They have so many, they could Game of Thrones the hell out of the show once every two weeks, and by season end, there’s still six characters left. My math’s off, but you get the idea. Trim the fat. You have two quirky scientists. Axe one of them. You have 2 gun-toting hard asses. Axe one. You have 2 Canaries. Break one’s neck after you’ve injected bleach into her veins and set her on fire, then reform Laurel, you canon-destroying-on-a-whim, Felicity-fellating jackasses.

The Flash, what do you say about it? It’s a consistently good show. This week and last week were no exceptions. The writer’s have loosened up on the overly dramatic reins for the time being and everyone is having fun. We didn’t get to cover this, so we’ll touch on it here, last week’s episode made it enjoyable to watch Barry and Iris together for the first time in a while. She wasn’t constantly harping on him all episode and he didn’t spend the tenth week in a row explaining how he’ll never let anything bad happen to her. For the first time in a while, there was natural chemistry between them, and it was good to see.

As far as the fun goes, they introduced Hazard this week; a girl with the worst luck in the world, until she’s introduced to dark matter, thanks to Barry’s return from the Speed Force. She’s a petite blonde that’s  funny and fun to watch. In the end, she’s monster of the week, so they wrap her story quick, but she’s got a bigger part to play in Junior Brainiac’s no good, very bad scheme.

This week also saw the return of Tom Cavanaugh (It’s about time you got here! Welcome home!)  and Earth 2 Harry Wells. Always good to have him back so Cisco has someone to properly bicker with. The problem there is Harry seems a bit too…not scatterbrained, but less full of himself than when he was around previously and that felt like it lost something. Still good to have him back.

Also, I spent the episode deciding that Cecil needs to back the hell up a step. But, that’s obviously not going to happen. Nice cut to black on that one.

Understand that before we get too far into this that we know. We do. We know and we understand any trepidation you might be feeling with this being the second Round-Up in a row that Legends came out as top dog. If the illness hadn’t struck last week, Legends would have been number one then too. WE KNOW! It doesn’t make sense!  After the first two seasons, we get all of it.

Listen up, though: Legends is the current champion of the CW’s Arrowverse. If you aren’t watching, you’re missing out. Allow us to explain.

Is it a perfect show? No. Some of the worst extra acting around. Sometimes the mains’ acting isn’t all that great either. But what is it about Legends that we find so damn convincing? We said it last time: They’ve found their voice. The writers and showrunners know what they are, and they’re making it work. Not everyone wants the light-hearted approach that Marvel takes with it’s properties muddling in with the super serious world of DC, but this is exactly what the show needs to be.

The Legends aren’t a stoic band of heroes that save the space time continuum while attempting to bone each other in the meanwhile. They’re an imperfect group of screw-ups and also-rans that are doing the best they can with what they’ve got. The showrunners finally cracked that code and allowed themselves and their characters to be fun.

The introduction of the Time Bureau, run by previous captain Rip Hunter, is the perfect adversary for the Legends as they skip through time striving to put right what once went wrong (thanks to their incompetence).

Thats not to say that there aren’t moments of them potentially falling back into old habits, but we’re still cautiously optimistic. The reintroduction of Amaya to the Waverider is a slippery slope. We’re waiting for the moment when they fall back into the well-trodden drama of a relationship between her and Nate, but so far they’ve avoided it. We can only hope that they continue to steer around it so as to not get bogged down with the heavy-handedness of their relationship.

It probably feels unnatural to you, but unless you’re staunchly opposed to humor in your Arrowverse, this is the show to watch. It’s been consistently entertaining for these first three weeks, and with Matt Ryan’s Constantine slated to come aboard, hopefully it can only get better.