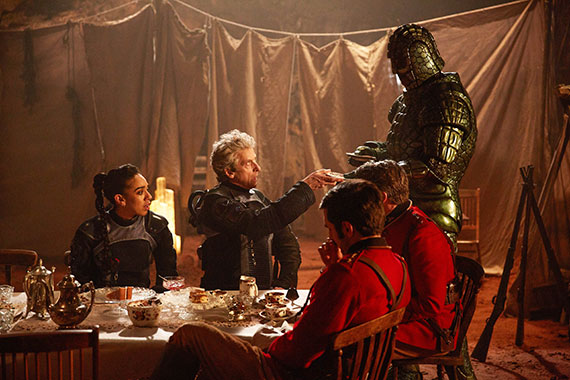 The Ice Warriors are Back

NASA, not rogue tweeting. We haven’t hit full dystopia. The Doctor and Bill and Nardole bust in on the Valkyrie launch to probe Martian ice caps. So you know you’re getting the Ice Warriors, because ice caps + Mars= this classic Who villain.

This episode was written by Mark Gatiss, who many Whovians tend to feel can be hit or miss when it comes to writing Who. I liked “The Unquiet Dead”, “The Lazarus Experiment”, “The Crimson Horror” (horrible moment of the Doctor towards Jenny aside), less loved “The Idiot’s Lantern” and some of the others. I don’t think he’s a bad writer, though, and his stories always have an interesting concept even if I might not always like them. What Gatiss does well, I think, is writes very contained episodes that often don’t have much impact to the overall story but often do come with some great moments of tension. They’re like those nights when you just want a box of mac and cheese but add a little gouda or Gruyere for some substance while knowing full when it’s still one-off comfort goo.

Now let’s back to the episode. Mars, 1881. This is when the “GOD SAVE THE QUEEN” message was created.

Pearl references The Terminator and she has my full blown love and loyalty now. Because the Doctor is smarter than the scientists in Prometheus he stops Bill from just taking off her helmet on the presumption because there’s fire there’s oxygen and goes to take his off first, because the Doctor as we’ve established is totes down with the space suffocation to save his companions. But there is oxygen but how can that be on Mars? Bill then references The Thing and honestly, she’d probably make a great movie writer for Geek Nerdery.

As Bill wanders she quickly falls down pit, and as Nardole goes to get ropes  in the TARDIS, the TARDIS controls operate on their own and transports itself away. Down in the pit and above, Bill and the Doctor come across our buddy and yours, the Ice Warriors. Except for Bill it’s not an Ice Warrior, it’s FERDINAND KINGSLEY! Aka Catchlove. BTW: love me some Ferd. He’s great in Victoria. Really hope his career keeps going well.

And then the Doctor runs into another human, a game hunter looking chap, who it seems is actually defending the Ice Warrior from the Doctor.

Nardole ends up back in the Doctor’s uni office, and goes to the vault to seek out Missy’s help to get back to Mars by getting her help to pilot the TARDIS. This will go swell.

So the Victorian era soldiers, as it turns out, were stationed in South Africa and found the Ice Warrior ship and the Ice Warrior they call Friday and that’s how they ended up on Mars. The Doctor, initially not buying all of it, wants the whole story. The soldiers woke Friday up and offered to help in return by helping them build an alien-tech mine to drill for precious gems and gold. So they went to claim Mars and its treasures. But sadly, there’s nothing there for crown or kingdom. Now supplies are running low and the soldiers are desperate. So what we have here is another really interestedly done allegory: manifest destiny and colonialism, where the Victorian soldiers try to colonize Mars and loot its goods for the kingdom. It’s hard not to miss the parallel, to be honest.

The Doctor explains the Ice Warriors could build a city out of sand, crush whole civilizations, like the Vikings as Bill puts it.

When the Doctor talks to Friday to ask him why he’s come back to Mars, the Ice Warriors says he’s old, tired, and spent. It’s a short conversation cut by the next scene of the soldiers drilling through a whole and uncovering something. That something is an Ice Warrior tomb, and Ice Warrior queen tomb. This sets off the Doctor’s spider sense and it turns out that this could possibly be part of some coupling ceremony and that Friday might be using them all. But as the Doctor warns them, Catchlove displays a sense of egocentric patriotism because they claimed Mars and they’re British! And they aren’t running away.

So when of the soldiers decides to try and loot the tomb, he is grabbed by an Ice Warrior, except it’s not Friday. Looks like the Queen has awoken and oh my Christ, is this episode also maybe kind of Mummy-inspired because if so then okay, Gatiss, we are good! Honestly, this really is starting to feel like old school serials of the kind that Indiana Jones was based off of. Anyway, so yes, it is Friday’s queen, and she is resurrected. And they slept too long by 5,000 years.

And now the soldiers are on high alert. The Doctor, realizing they’re in the shit now and somebody’s got to shovel it, tries to handle the situation by Catchlove is too eager to be That Guy until the Doctor intervenes again to negotiate with the queen and beg for mercy. He reveals the surface is lifeless and that they cannot survive without help and must cooperate if they want help. They are likely now last of their kind. The queen wants Bill’s opinion as a woman, since they’re surrounded by noisy males. Bill reinforces they should cooperate. The queen then is unhappy by this situation but the Doctor implores her to fight for the future until one of the dumb soldiers fires off a shot at the queen.

Catchlove chooses that time to reveal the Colonel was hung for desertion and it failed, to pick a bad time to create dissent. Oh, but the hive is active now so I guess there are more Ice Warriors and oh my god Catchlove this BUT WE’RE BRITISH is going to get you killed, bro. So they lock up the Doctor, Bill and the Colonel and the queen and Friday go and wake up more of the hive to go on the offensive.

And that’s where I’ll leave off on this synopsis because don’t want to give away too much.

Honestly, this was a pretty great romp from Gatiss that feels like old school adventure/sci fi of decades ago from radio/story serials. This might actually be my favorite episode he’s written and a welcome improvement to the past three that were the mildly disappointed Monks story. I like that he was very conscious to not glorify colonialism and instead pretty blatantly critiques it, making it clear these soldiers are not heroes. The Colonel is written as a rather sympathetic character who makes an attempt to redeem his actions, but while he gets a noble moment and seemed to just honestly want a fresh start, the episode is also careful to make sure you understand that fundamentality his actions were still not okay and that’s part of what he tries to redeem for.

And the Doctor isn’t it actual genocide mode taking sides, he does try to save the humans but he’s not here to also actually kill the Ice Warriors too, he’s trying to find the middle ground and in some ways succeeds.

Overall, I quite loved this episode! There’s nothing ridiculously hand-wavy, no “I AM THE DOCTOR!!” centric bullshit that reallyyyyy rubs me wrong, and it’s just a really solid single-story episode that feels like it hits the earmarks of a lot of the things that made Classic Who good while still being firmly in this era of Who.

From what it sounds like if reviews of the movie are to be believed, you’re better off skipping the new The Mummy movie and just watch this episode instead.

Okay, one spoilerly bit of the end:

So Missy was in the TARDIS and showed up, but actually acquiesces to be put back in the vault and it ends on her asking, seemingly genuine, if the Doctor is all right. Is this genuine or one hell of a long-game?