In the new film A CURE FOR WELLNESS, set in a remote Alpine spa, the film centers on star Dane DeHaan as Lockhart, an overly driven Wall Street stockbroker who is sent by his firm to retrieve the company’s CEO, Pembroke (Harry Groener), a patient at the spa, who has made it clear he is not leaving. Once Lockhart arrives at the picturesque and serene sanitarium, the miracle cure the patients are receiving, seem to be making them more ill. As Lockhart digs deeper into the enigma that the cure provides for its patients, he befriends a young woman, Hannah (Mia Goth), a mysterious patient herself and Mrs. Watkins (Celia Imrie), a patient who after doing her own investigation, has some answers that compel Lockhart to compromise his safety and sanity. Lockhart is soon diagnosed with the same ailment as the other patients by Dr. Volmer (Jason Isaacs), the institute’s director and is now trapped himself. Soon Lockhart questions what is his basis of fulfillment and what being well truly means.

On February 9th, I had the fortune to speak with Oscar winning director, Gore Verbinski over the phone regarding the film, behind the scenes circumstances, teeth and space pirates.

CG: Thank you for speaking with me today for Geek Nerdery.

CG: I have to say, your movie made an impact on me even this morning, getting a glass of water at work and it made me look at it differently.

GV: Fantastic. I hope it has the same effect on what makes people well in the health spa.

CG: I wanted to know with the aspects of the spa, water, eels which I can see as snakes, heights, confined spaces and dentistry, you’ve almost nailed the major phobias of most people, besides clowns and spiders. (he laughs) Do you think that fears contribute to wellness or make people feel better if they confront their fears?

GV: Well I think in our movie there is this place, high above the clouds in the Alps and it has been there for a long time and has watched humanity thru the Industrial Revolution and the advent of personal computers, our obsession with our devices, our cell phones and it’s offering a diagnosis and as Lockhart played by Dane DeHaan is summoned to this place, he is sort of slipping off the map and he is no longer in a waking state and entering this dream logic, so we are taking something very tranquil and soothing and this place of purification and then slowly corrupting it. We are turning those dreams into nightmares and bring there all your personal phobias as you make a movie like this. You try to show them to people in a private room.

CG: Definitely. My primary job is working for a dentist, so I have to say you guys did an excellent job in showing the teeth and gums in the x-rays because I read those x-rays and I was probably the only one in that theatre that knew exactly what was going on and that..that was not good.

GV: Yeah, you know it was weird, Cati. As I was on the shoot, I had a problem with a tooth and had to go to a German dentist and in Germany, not really knowing anybody to make this movie and it was very ironic having to be in this chair after constructing this scene in the movie, two guys in masks over me, drilling your tooth, speaking German to each and I had no idea what they were saying. It was uniquely horrifying. 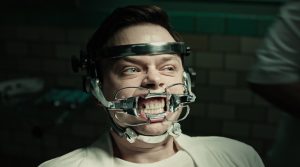 CG: That sounds horrifying! Why did you feel like you needed to make this movie now?

GV: Well, I haven’t really been in this genre for a while and it is a fun place to operate and you are watching Dane Dehaan’s character, Lockhart sort of slowly become assimilated in this place and reluctantly becoming a patient in this facility but really YOU are the patient. You are in a darkened room and worries enshroud an image and narrative to conduct an experiment on the audience. I think that there isn’t really another genre that allows that to occur in quite the same way and or allows you to be as covert in your kind of spellcasting. So I don’t know if that answers the question but I do like and enjoy the process.

CG: That totally answers the question. Were there any behind the scenes circumstances that put you in a different creative direction while filming?

GV: You are always, once you start, like a blank page, for myself and the writer Justin Haythe. By the time I got to the shoot everything, it was pretty precisely planned but then inevitably, you are in triage mode pretty quickly. Whether everybody’s good or when on location our stage caught fire and an entire stage burnt down, so here you adjust and try to hold on to what is most precious and move things around to try to come out with exactly what you need.

CG: Set wise I knew nothing about the castle that you filmed at and it is now on my bucket list.

GV: It is a great place.
CG: It is absolutely breathtaking and from the start this film has some of the most beautiful scenes in cinematography and film making I have ever seen. When you captured the train going into the tunnel, How did you do that with the camera next to the train? That was mesmerizing.

GV: Yeah, that is a really interesting location in Switzerland, where we had to really measure down to the millimeter in the clearance of that camera with that tunnel. So at first we went really slowly and we had attached our camera to the side of the train and backed up and pray that there wasn’t a sway left or right on the track or another train while the camera was going thru there. The movie it really is about two worlds. So you have Lockhart as the Modern Man and there is this, is this kind of ancient place and in the end Lockhart and Hannah in a way don’t belong in either of those worlds so reflections become very important and splitting apart with things and that was one of those locations as soon as I got there, knew as soon as we got there, you start to play with the camera and lens, and it was the location scout that found that place and I immediately knew that was a shot we were going to let play.

CG: Why do you think geeks will like this movie?

GV: I think the fact that you don’t know anything about it, ya know? I think so often these days we go to see a movie and maybe we’ve played the video game or we know the toy, read the book or comic strip or there’s a theme park and this allows you to get back to the time when you went to movies you didn’t know anything about the story and geeking out on that. That’s what excites me. I love finding an old movie I’ve never heard of or never seen and someone refers to it and like rediscover every champion in cinemascope. So serene for me in itself and for everybody, so yeah I think we try to make something even for A audience and not for the masses and hopefully they will find it and those who like it will feel like this one..is a love letter to them.

CG: Who is your favorite space pirate?

GV: Oh my God, I don’t know. Can I get back to you on that? You caught me, I always hate those questions like, what’s your favorite movie because they evolve and they change and as soon as I blurt them out, blurt out an answer they are stuck forever… in amber and I’m an evolving being. So who’s yours?

CG: Mine actually is Malcolm Reynolds from Serenity and Firefly

CG: Most people will say Han Solo and ya know there will be others and even recently there is Mark Watney, Matt Damon from the Martian, who even proclaims himself a space pirate.

CG: No, no I want people to think about it because technically Barbarella is a space pirate as well.

CG: It’s been nice chatting with you and if you are ever in Chicago and need any dental work, please keep my number and let me know.

A CURE FOR WELLLNESS opens nationwide in theaters February 17th.
Cati Glidewell is also the creator of The Blonde in Front
www.theblondeinfront.com
https://www.facebook.com/BlondeInFront/